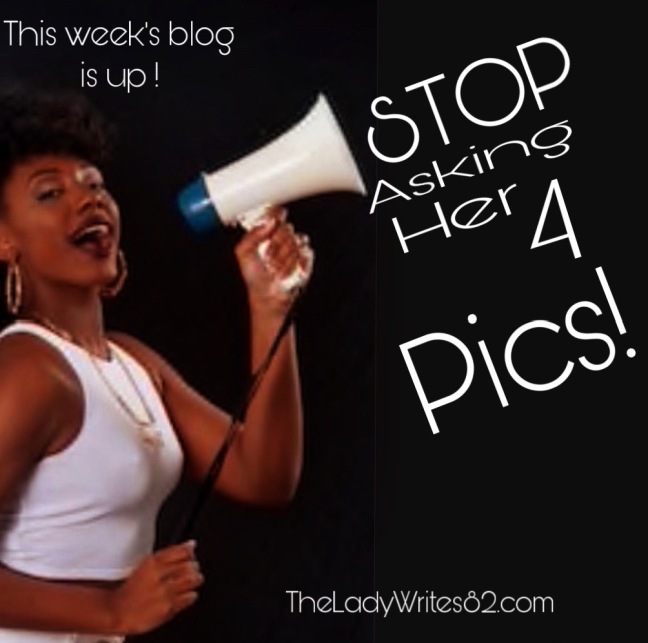 So I’ve been dating dating.

And when I tell you that I’ve had some … let’s just say … some, ahem, experiences …

But none of them set my aggy train a’rumblin’ more than the “Send me a pic,” head azz type of dude.

That’s right, I said it.

Because this widespread epidemic is ruining many first dates;  shit, many first conversations and it needs to be stopped.

If you don’t know what I’m talking about, allow me to paint a picture for you.

And while he wasn’t necessarily physically my type, I thought, “What the hell, girl. Go on ‘head and give him your number.” I mean he was respectful, shook my hand, told me his government name (if you don’t know what I mean by that last part, this might be the wrong blog for you lol).

We start texting a bit and everything seemed normal until he texts “Send me a pic.”

So I ignore it initially because…

It just didn’t make any sense!

You literally JUST saw me. Why the hell do you need a picture?

I tried to move on with the conversation and things seem to be going ok again.

Until the next day …

Asks me for another pic.

And we repeat this dance of “ask and ignore” two more times before I finally reach the point of exhaustion and tell him that I’m cool off the whole situation and I’m not interested -AKA- “stop texting me, bro.”

If you’re confused about what I’m getting at, let me say it simply.

And while I really shouldn’t have to explain why, let me allow you a small peek into my mind when the request is made.

My first thought is:

If for some reason I decided to suspend all logic and wanted to send you a picture of me (even though you literally just saw me and what look like is not a mystery), I’d just do it. I don’t need to be coaxed into it … let alone be downright harassed.

My next thought is:

Wait a second! I know you’re apparently raggedy ass isn’t asking me for pics of  parts of my body that you didn’t just see … PERV!

Because if that’s what you want …

There are women who get paid for that.

Although I can kindly refer you to a few, if that’s what you’re looking for.

The point is, asking a women to send you a pic is not only annoying, it’s also a surefire way to exponentially decrease the odds of achieving any sort of meaningful, future, pleasurable exchanges with said woman.

In other words, WOMEN DON’T LIKE IT and you’re not helping your cause (regardless of your intent) by asking.

In fact, ALLLLLLLL of the women I asked about this apparently widespread phenomenon have said that that “let me get a pic” text is where they lose interest, regardless of the type of relationship she’s interested in.

Trust me, even if she was only interested in a physical relationship, sending that text makes her vagina want to detach itself from her body, pack a bag, and catch the next flight to the farthest point on earth from where you’re currently sitting.

The next time you’re chatting with a lovely, young tenderoni …

I want you to put the phone down …

Walk to the nearest mirror …

Until next week folks …

Well, you know you can keep up with my antics every other day of the week: