The old saying “beauty is in the eye of the beholder” is a cliché for a reason. There are all kinds of people in the world, many who don’t fit into what society tells us is beautiful or handsome.

And then there’s that one guy at the coffee shop (or whatever place you frequent) who you couldn’t see being handsome in anyone’s eye, but for some strange reason you want to rip his clothes off and mount him on top of the coffee beans. ß OK, I took it too far there, but you get what I mean.

I’ve come across these inexplicably handsome people a time or two throughout my life, but I always thought it was something wrong with me. I mean, I am pretty strange after all.

But I have finally been vindicated!

According to Dr. Heidi Reeder in her article in Psychology Today, I’m still strange, but not as much as I thought.

“In many cases, however, heart-racing sexiness has little to do with beauty. We can be intensely attracted to people who don’t fit the maxims favored by evolutionary psychologists, and that tells us a lot about sexiness,” Dr. Reeder says.

What! My thoughts have finally been validated by actual scientific evidence!?!?!

Now I can admit it to the world that I’ve always had this thing for Don Cheadle. The man my sister says looks like a Ninja Turtle. I don’t know what it is about him, but I would marry that man … seriously! 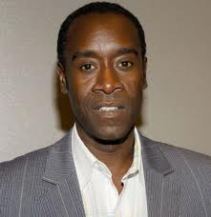 Oh, and Mike Rowe from the now defunct Dirty Jobs just does it for me. He has this Shakespearean vocabulary, even when talking about New York City subway rats. That’s just hot!

Who cares if the rest of the world thinks you’re beautiful Don and Mike. I do! Allow me to embrace your “Ugly Sexy” and let’s ride off in the sunset together.

Want to be really cool?