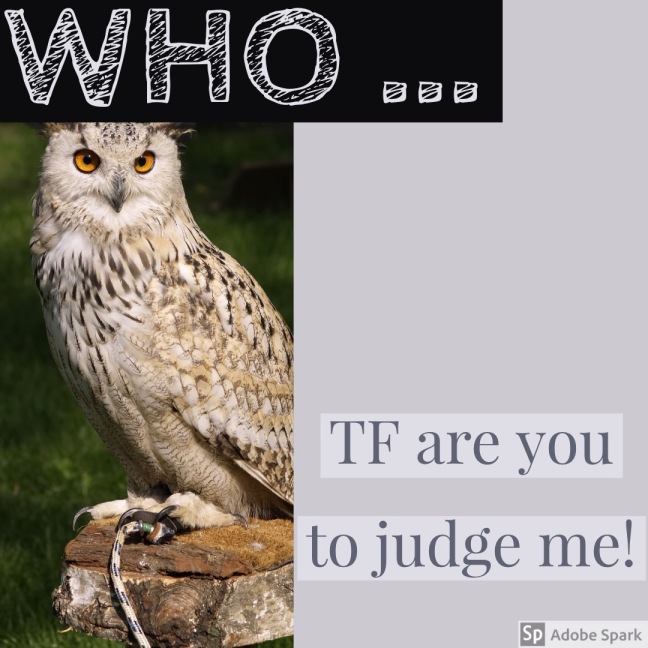 I can be judgmental af.

So I’m working on it.

I think you should too.

So let’s consider this session of Getting my &*#@ Together, a Judger’s Anonymous meeting of sorts.

I’ll see someone with face tattoos and label them a bum; because who’s going to hire you looking like that.

I’ll see a woman with 5 kids swiping her EBT card and think, “Why would you have all of those kids if you can’t afford them?”

But if I haven’t learned anything over the years, it’s that:

We judge people when their behavior doesn’t line up with what we believe or when we determine it’s something we wouldn’t do.

But it never was.

And because I don’t like the way it feels when someone does it to me, I make a conscious effort to not do it to other people.

Just because we don’t understand something, doesn’t mean we have to demonize it.

Just because someone is engaging in behavior we wouldn’t doesn’t automatically make it wrong.

We literally say to ourselves “I would never do that, so it’s just bad,” like a pouting middle school girl.

But who said it was wrong?

Did you magically evaporate into the universe and become God?

Were you anointed by the trees to stand over other people and cast shadows?

Yeah, I thought not.

Whether it’s right or wrong has nothing to do with you; whether it looks good is not your business;

So the next time you feel yourself creeping down that slippery slope of judgment, I want you to stand in the mirror and repeat after me:

Is this person hurting anyone else with what they’re doing?

Is that person trying their best?

Do they appear to be happy with what they’re doing?

I want you to take a few deep breaths …

A few steps back …

Into your own damn lane and ask yourself what any of it has to do with you.

When you realize the inevitable answer is “nothing”, I’m going to need you to give your reflection a good head nod and mind our own business.

I swear it works.

Since I started doing this, I started seeing the world differently.

I’ll see a woman with a lime green Mohawk and be like “go head, sis!”

I’ll see that same woman with all of those kids swiping her EBT card and say a silent prayer for her sanity and bravery for venturing out with her beautiful brood.

I’ll look at the man with the face tatts, and applaud his willingness to give the world the finger.

Because it’s not my business,

And the world is mean,

And the last thing we need to be doing is being mean to each other,

Even if it is just with our thoughts.

Until next time folks,

When you change the way you look at things,

The things you look at change.